Since the conclusion of the popular show, SpongeBob SquarePants people have kept it alive through funny SpongeBob trolls and situational SpongeBob memes using meme generator sites and tools.

Who doesn’t adore the misadventures of a talking sea sponge who works at a fast-food restaurant, attends a boating school, and lives in an underwater pineapple?

Without further ado here are the 15 best meme generator SpongeBob:

Mocking SpongeBob or chicken SpongeBob meme is based on a screenshot taken from the season nine episode of SpongeBob SquarePants titled “Little Yellow Book,”.

In this episode character of SpongeBob turns into an angry lecturing figure (imitating a chicken, no less) who appeared to be scolding and/or mocking something we can’t see. Using this link you can generate your own Mocking SpongeBob meme. You get the option to write your own meme SpongeBob text and it’s that simple.

This is one of the best meme generator SpongeBob where SpongeBob gains muscle. This meme is probably originated from the episode MuscleBob BuffPants.

This is one of the best meme generator SpongeBob templates. SpongeBob looks quite casual in front of a monster and looks like he is not scared at all.

The meme is originated from an episode aired on May 5th, 2006, the Spongebob Squarepants episode “Ghost Host”. In the episode, Spongebob is unimpressed when he is confronted by the Flying Dutchman, who attempts to scare him by shapeshifting into various monsters

The linked website provides the option to fill the text and create your own meme. Text #1 will generate a statement for the monster character while your input in Text #2 goes to the SpongeBob character.

Check this cool SpongeBob vs Monster meme from the same website. 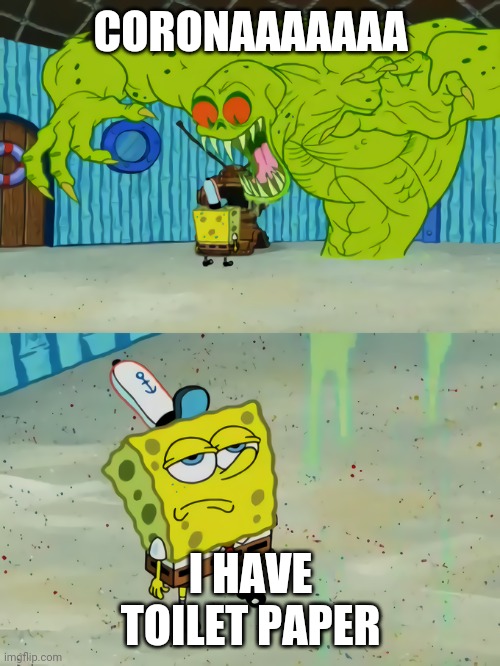 Well, at the moment we can’t find the original episode from which this meme is generated. How about if we show you how to generate a SpongeBob smile meme? You will have to go to the link given in the title and as usual, provide your input Text #1 and Text #2 which best suit the situation and fit the meme.

This meme is taken from the episode titled “Ugh” from Season 3. In this episode, SpongeBob, Patrick, and Squidward’s prehistoric ancestors SpongeGar, Patar, and Squog discover fire.

The Caveman Spongebob meme is quite popular because of the innocent and ignorant look of Spongebob. You can use the link from the title and generate your own Caveman SpongeBob meme. Imgflip offers really cool meme generator SpongeBob template.

This meme is popular with many terms. For example, SpongeBob Come Closer, Come Closer I Need, and known as SpongeBob I Need.

This meme is pulled from season one, episode two (“Ripped Pants”), released on July 16th, 1999, specifically, the montage where SpongeBob continues ripping his pants in a multitude of situations to make people laugh.

In this popular meme generator SpongeBob asks fish to come closer and it appears that he is going to say something important but instead he says something funny.

The linked website provides a meme generator SpongeBob template where you get the option to fill the two text boxes and create your own meme.

This is the meme generator SpongeBob where SpongeBob SquarePants looks sad and thinking.

This particular scheme from an unknown episode has given thousands of memes for millennia. You can fill the inputs in Text #1 and Text #2 boxes and create your meme from the website given in the title link.

Imagination SpongeBob meme is very popular where a rainbow appears to be in SpongeBob SquarePants imagination.

The origin of this meme is from an episode titled “Idiot Box” from Season 3. In this episode, SpongeBob and Patrick use their imagination to play with an empty box. Using the meme generator SpongeBob template you can fill your imagination-related meme text and create an appealing and funny meme.

You can fill Text #1 and Text #2 in the template which appears at the top and bottom of the image and you can download your meme.

This is one of the best meme generator SpongeBob template where SpongeBob appears to be showing garbage to Patrick.

This meme template is taken from the episode called “Sanitation Insanity” from Season 11. In this episode, when Mr. Krabs gets in trouble for littering, he makes SpongeBob and Squidward clean up Bikini Bottom. 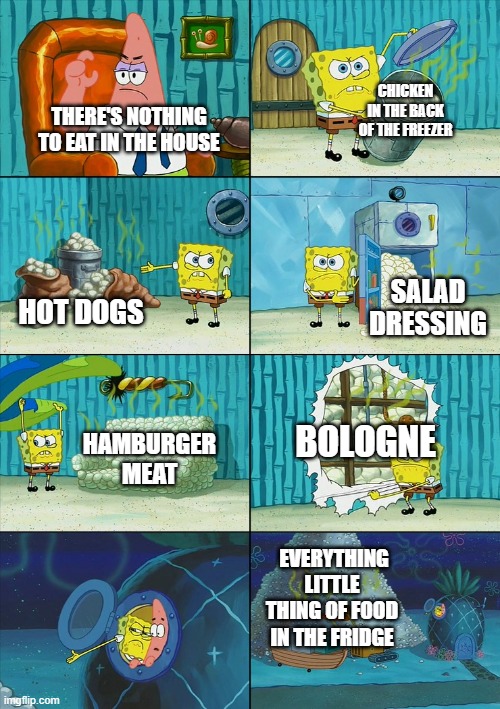 Imgflip meme maker website offers seven input texts where SpongeBob says something about each garbage. You can fill in the contextual text to all 7 input boxes to generate your meme.

In the episode Spongebob burns his hands, he then screams “AHHH! I BURNED MY HAND!!!…at night” along with doing other things he keeps adding “At Night” at the end of his sentences.

In this meme generator SpongeBob template imgflip offers two text boxes that can be filled to generate SpongeBob at night meme.

This is the simplest meme generator SpongeBob template where SpongeBob appears to be running to somewhere in a hurry.

The origin episode of this meme is not clear as this looks like a very generic scene and can be from any episode. Even it can be generated from other episodes as well. SpongeBob brain chaos meme appears to be taken from the episode titled “Brain Office” from Season 3, released in 2002.

The Brain Office and its workers are visual personified metaphors, that represent what is going on in certain characters’ minds. A brain office has appeared twice in the series, first in the episode Squilliam Returns, like SpongeBob’s brain office. In the episode Chum Bucket Supreme, Patrick’s brain office is similar. Imgflip offers two texts boxes for the SpongeBob Brain Chaos meme generator template. You can fill them with some chaotic texts and generate some funny meme related to SpongeBob,

Well, this meme generator SpongeBob template is the one where SpongeBob cannot be seen yet it is quite popular.

This meme template is taken from the Spongebob Squarepants episode “Sandy, SpongeBob, and the Worm” originally aired on October 12th, 2001. In the episode, the character Patrick Star provides a possible solution for dealing with the threat of an Alaskan Bull Worm, by suggesting they relocate the entire town.

However, the expression of Patrick is so funny that people use it to create hilarious memes to entertain their friends. You can write your own two punch lines and create memes using this template from the title link.

SpongeBob is quite famous for its hilarious expressions and generates memes. However, a lot of people love to express their funny feelings in SpongeBob mocking text too.

Lingojam website (link in title) offers full translation of your text into SpongeBob mocking text. You can input your text and once it is converted you can copy and send it to your friend.

You can even make memes based on other characters like Patrick, Squidward, Sandy Cheeks, and many more.

Well, here we end the list of 15 best meme generator SpongeBob templates, tools, and websites, We have taken most of the tools from a very popular meme maker website imgflip.com. This list would not have been possible without imgflip. You should definitely check out their website.

Physical strains, overexertion, and injuries while working are much more common than you think. Moreover, some occupations like construction are at a much more serious risk than office-based work. That is why Workplace safety protocol is as important as work itself.

Finding Clipboard on iPhone along with interim data is main objective of this article. Now question is what is a Clipboard? The Clipboard is a buffer that some operating systems provide for short-term storage and transfer within and between application programs. The clipboard is usually temporary and unnamed, and its contents reside in the computer’s RAM.

Spread the loveIt is necessary to upload content on regular basis to your website for better search engine optimization and for getting good traffic. But producing unique and interesting content daily is very difficult. Fortunately, AI rewriters are serving this purpose. According to a survey, artificial intelligence is working in 37% of companies due to […]